﻿
I love the Swiss Inn at Harbour Square.
I first stayed there in 2009 when I was flying General Burns to survey the surface radar sites donated by the Americans for the anti-piracy watch on the Sabahan east coast.

This time around, and as an employee, the resident pilot at the Sandakan branch of the company had some personal admin to take care of and I was sent to the branch to take over his assigned tasks.

I had 4 VIP ministerial flights, one forestry department aerial survey and one return to base ferry flight for the aircraft.

My previous record of stay at the Swiss Inn was still retrievable, making my arrangements much easier. There was food everywhere along the waterfront up to the naval station at KD Sri Sandakan. But I chose to stick to the kitchen ware, as it looked cleaner than the streetside vendors' churnings as they worked at shaving a living off tourists from  the adjacent B & B spots.

It was also the BERSIH week.

Which made the ministerial flights awkward. And difficult to be witness to.

I would hear how the populace of our intended village stopover were all staunch supporters of the party. I would be used in their speeches as a punchline on how they were telling "their pilot" of the villagers' unwavering votes in their favour. I could hardly feign applause. So I would use my gloves as hands, slapping them against my knee. I could do no more even though they placed me at the VIP circle of benches. I smiled less from concurrence than in amusement, hoping it wouldn't betray my "bah!!humbug!!" thoughts. It is awkward to fly them back when they occupy the front seat and I can't muster a slap on the back remark. These are the most ravaged people in the country, and the development programmes in their wetlands will pollute the rivers, water ways and coastlines from whence they scrape a survival rather than a livelihood. The best I could do was the hold a straight face and spew generic remarks about the en route weather and turbulence at our cruise height.
﻿

I liked the MP whom I was flying around in his constituency. He kept me as a guest in his circle of aides and always checked how I felt after each meal. Which was just as well since I was looking at stuff I had never seen before. River prawns stewed in tapioca, fern shoots in mango, various types of hermit crab, horseshoe crab and lots more whose names I remember not. He was the first MP I have flown who always referred to me on the expected duration of the weather. But seeing how he had to execute damage control for the very chap who screwed this region, I knew I didn't want his job.

﻿﻿
﻿﻿
I don't want mine either.
I flew the aircraft back to KK on Friday morning, pushing off early before the strength of the sun could raise the carpet clouds above the mountain peaks. As the Bell is not an instrumented aircaft, I dove under the covers at Klagan Sandakan and flew at treetop till the weather became definitely better approaching Sungai Sungai. Climbing to clear the terrain, I was on the NorthEastern side of Mount Kinabalu, and I sighed as I looked at her distinctive silhouette against a hazed background sky.

From Sungai Sungai I crossed the final vein of the eastern Crocker range and descended to Tandek, caught sight of Kota Marudu and gunned straight for the Kampong Empatbelas valley. I sought clearence from Kinabalu to track along the coast at low level till abeam of Tuaran so that I could clear the Kota Belud RMAF air to ground firing range. I checked my watch and noted that it was 0830, with 0900 as the range activation time.  Low along the beach I flew, the wind to my back as the rhues curled away from the sea breezes which sped me along towards Tuaran. Kinabalu airfield was just a few minutes off, and I was soon crossing the active runway to land at the company hangar. The ground crew came rushing out to tow the aircraft in, and I was told to join the other chaps in the ops room for a pre-shooting brief.


Ahmad Idham was shooting his latest movie, Gerimis Mengundang, a collaboration with some Indonesian actress where the scenario was of a helicopter pilot who crashes in the mountain range and dies. Right, a likely story as ever. My job was to fly the part of the ill-fated aircraft, hovering in the dead man's curve and simulating a crash into the jungle while Capt H flew circles around me with the camera crew to harrass me with their insane demands.

It was a hot afternoon. Climbing into the Kiulu valley was a turbulent affair as a gathering storm over the Crockers was moving sinisterly towards the west. It took a complete 70 foot reel of film and then some to finish the shoot by which time I was exhausted from the having been on the job from 6 in the morning. I met up with Harry at Coffee Friends and had yakked about my week in Sandakan, my events and misgivings and went home for a good bath and much pondering.

I would not ordinarily fly the dead man's curve unless it was to save someone's life, as I did with the then Major Fajim Juffa when he ejected and went missing in November 2004.  But here I was, doing this because I am being paid by a client to do what runs against my aviator's better sense. I slept restlessly that night.

I woke up with a lump in my throat and stared  at my cellphone. I spoke to a few friends, and soon I was feeling much better. I lazed my weekend away, just bent on unwinding from weeks of a creeping, unsettled feeling of disquiet over the way I made a living.

I am in transition again. This time the vibes I get are much better than those I had when I was edging out of the air force. Yes, I get to meet up with an old archenemy in my new workplace, but that old sod has been described by my future workmates as of insignificant stature now.

Come October, a new life commences. Okay, Capt Jeffrey. Shed those ranks. You're going to be a copilot soon.

But It Is Not This Day

I was sent to Sandakan to fly a few sorties on the fateful day of 9-7-11.
I was probably crossing the Crocker Range at the time the march began.
I was hoping against hopelessness that the ruling government would stand down and seize a legitimate moment of glory for itself. But later in the day I was to discover both in pride and sorrow that it failed to be the bigger guy and yield. Pride that Malaysians are now willing to fight for a better country and return us to being the Golden Chersonese. Sorrow that the country's leadership refused to budge from the role of abusive parenting.
I am a civilian now. 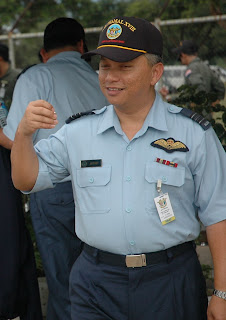 This day I would not have wanted to be in uniform. Not when the government would have exercised emergency laws to harm its own citizens. The authorities tried to use the military during the days of the Reformasi. Thank God we had an Armed Forces Chief who had the appendage to tell the authorities that we would not mobilise against civilians we signed up to fight for, and that the cops could do their dirty work for them.
I wouldn't ordinarily trust a cop further than I could throw him, having known of their inimitable modus operandii through work experience, but at the same time I have had some good experiences with them too.  We worked together in Acheh and also when I was in MINDEF in processing the approval of military aircraft to ferry goods and personnel that air charters would not.
Thus, I can sympathise with a few of them.
For as time draws on I am witness to more and more erosion of common sense and the decompostion of good governance. Were I in uniform now, I would worry that the idiot at the helm of my ministry would issue a command to open fire upon people I had many times risked my life to draw away from harm.
Cops come under the Home Ministry. Lucky for me I was in the military requiring the King to issue the order. Yet as we have all witnessed, the King has been sidelined. So now even soldiers may be forced into what they really never ever want to do.
In all my years of serving and flying in the air force I was used to the idea that each time I took to the air could be my last moment alive.
I am afraid of dying but I didn't fear death in serving my countrymen.
What I did fear was the nitwit behind the signing of orders to kill.
Posted by hobbit1964 at 8:48 PM No comments: Links to this post