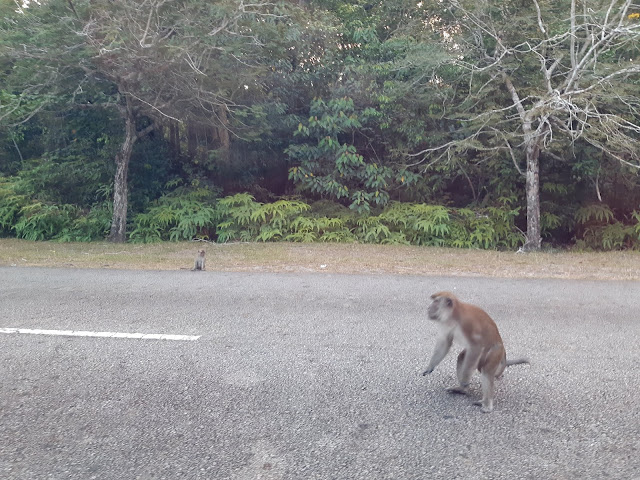 One of many which line the lane to the airport. They sit there at lunch and tea time, waiting for handouts from passers by or to watch the wild boar nuzzle for goodies between the roots and shoots along the very same road.

We know what good parents our Malaysians are when they feed these creatures from their parked cars for an evening of family amusement in ditchwater dull Kerteh, insisting on tossing the food scraps onto the middle of the road where the simians become a road kill hazard when the more humane option would be to toss the food on the grass, right where they are parked, engines running.

I ran over one of these one evening after a long day at work as I was heading back to my apartment. Of course I was remorseful, till five minutes after, when I heard painfully loud groaning noises emanating from my front suspension which I had already changed two days before, closer to home. Further investigations at a my regular mechanic's centre in Kuantan, not Kerteh, revealed that the suspension replacement  was carried out with incorrect suspension mounts. Lesson to self was to stick to one reliable chap instead of the closest at hand. And the epiphany was that if hat little fella hadn't dashed right into my driven path at the last possible moment no matter how I tried to avoid him, I may never have discovered the hidden hazard in my suspension.

Looks like the only morally right thing to do, in spite of remorseful roadkill, is to thank the monkey.
Posted by hobbit1964 at 5:17 PM 2 comments: