There is an old air force barroom limmerick, apparently attributed to a Commanding Officer who used to say:


It reminds me of times when following an aircraft incident or mishap, we would be stopped from flying pending investigations and declaration of airworthiness of the aircraft type affected, by the appropriate directorates. 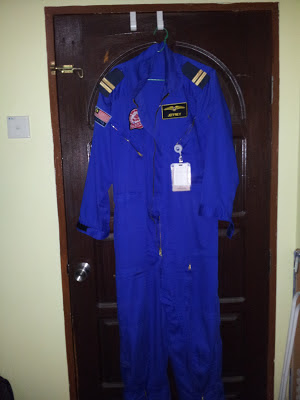 The entire aviation world works in much the same way, be it civil or military, in the interest of flight safety and a zer0-accident rate. Therefore, following the incident of 22 Oct, albeit a safe controlled ditching in compliance with the aircrew checklist (ACL), we are still on a precautionary stop-flight order. In the military we would be milling 'round the crew room, gleaning gossip from our flight commanders and COs, slurping the tricklings of phone calls along with coffee to grain out whatever foggy prediction of the near future as such inconclusive indices would afford.
However, in civil flying, you do not simply show up for work unless called for. Turning up at work is a day's productivity allowance equivalent in money, which is not your entitlement unless your name is on the flying programme. While in this instance, the fleet grounding is no fault of the crew or company, and therefore we are still getting paid, we still can't loiter aimlessly at work. That dampened frequency of hobnobbing with those in the know, plus the looser comradeship, both thwart and dilute the gleaning process.

So, with the current climate of uncertainty, my flying suit has hung motionless over my bedroom door . I do not remember preparing my flying suit and yet not flying in a long time , not since leaving the air force. ﻿
Which leads me to the matter of my oft-revived predicament that ever since the end of Ramadhan, my visits to Sundram's have been no more about scraping up a meal, but about indulgence while my exercise programme has slowly fallen to an indolent once in 5 days when I am on the 1300H muster. As a middle aged retiree with the dietary habits of a hobbit, it follows that this conflict of imperatives had rendered me being in need of an entirely new wardrobe as I slapped on the adipose with all the speed of a Dr David Banner metamorphosis. 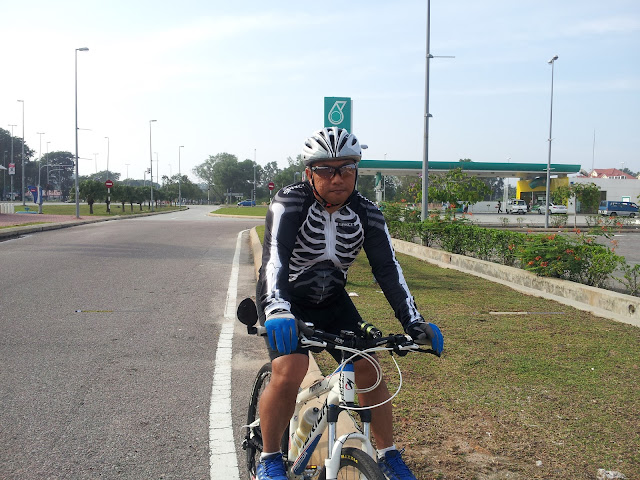 Seeing that the aircraft are in the hangar even in the best weather, I have had good opportunity to catch up on cycling. My ears are still open for the contingency call from the ops room for a full ground run, as I cycle, but so far it's been quiet.

I am a cyclist, but not a thoroughbred avid one. Other than for that one time when I cycled 122km from Labuan to Kuala Penyu and back, I have not had the opportunity to do any really long-distance rides. Though I do love cycling, I do not hunt down jungle trails, and the word "technical" to me has to smack of circuitry, not roots and brooks and inclines. My typical ride is out the junction and down the road and back, typically a run of 28km. It serves my purpose for now. Lamenting the loss of a good group such as the one I had in KK is fruitless and a bit depressing, you know, always running back to better times and the notion of what-if-I-hadn't. I would love a 5-day a week, 30 to 40 km at a time kind of harmony with my work schedule. However, the realities of holding down a house, weather and work scheduling impede that love, so that in the end it's about giving that final bit of frustration shoehorned into the last, or perhaps the very first, few minutes of daylight before I have to be somewhere else at somebody else's behest.
Therefore, this hiatus in flying, unfair as it may appear to our competitors across the tarmac who have had to fly more in our stead, has been a welcome break to jump start a long neglected habit. Else by the fifth day, I would be feeling breathless from not cycling.
I expect that I shall do well indeed when my next medical examination comes along, and my physician will be very happy with me.
On the other hand, I am hoping to see in my e-mail, that I am scheduled for a real offshore sector, instead of "as required". It is not good for  the fleet to remain on ground indefinitely, and I have doubts that we could go on the long and expensive route of hardware change in order to get up in the air again. Furthermore, I really want to fly.

So, please, Frere Jacues, please wake up soon, and break the news that the grounding is lifted.
Posted by hobbit1964 at 6:00 PM