It was my birthday morning four weeks ago, and I was not yet fully converted to the Super Puma L2. Being relatively unemployed, I began the morning with the full realisation that my longevity rests with the lifestyle I lead, and so I drew out the Apollo Exceed 10 for a solo ride to Kijal and back.

As I took a right at the gate and went merrily along with my eye on the rearview mirror, I nearly jumped out of my skin when what must have been a 17-year old kid came hurtling down the intersection at top speed beyond the design limits of a moped. A collision was imminent and he knew it as he squealed for a nanosecond on his worn out brakes, rediscovered the appendage where his brains lay in order to muster the guts to proceed, and wheelied across my path to where I hoped oblivion waited for him with arms wide open. As he passed smugly to my right, I spat out profanity under my breath as Liz Lemon would have, with the same lip curl enunciating "Motherfffffffffffff!!!!!!"

However, the world does not harken unto the wisdom of such poetic rebuking, and another few seconds down the Akashic Record's timeline, the lemming-brained youth was long gone to celebrate his Grand Prix reception amongst his equally unproductive bros. Or so I envisaged him doing.
As I pressed on towards the traffic lights at the junction of Jalan Cabang, I heard the mellow beat of a single-cylinder four-stroke moped creeping up behind me. I had a Lizzy McGuire moment where I imagined it was that same brat approaching from my 6 o'clock and I saw myself giving him a military-grade foul-mouthed tongue lashing in as many languages as I could muster squeezed into ten seconds.
My skin cooled beneath a flush of relieved sweat when I saw "Fadli" (names are obscurred here), a fellow cyclist but of the off-road persuasion, puttering beside me, taking his toddler out for a ride, with a sunshine-and-happiness tinged grin across his face.
"Good morning Jeffrey!!!!" He was in high spirits. I nodded back with a smile as I kept my breath in pace.
"What a baaassstaaard that guy was ya!!!!!!"
I immediately started laughing, rather uncontrollably, and so did he. Fadli must have witnessed the brief proceedings and identified that what irked me so was what would send him ballistic too. The straight-to-the-heart resonance between us stirred the spontaneous laughter. Nobody would understand but a cyclist, the same instantaneous rage that accompanies such a near shave with an accident, accruing to absolute stupidity on the part of someone else who didn't appear to value his life but would drag you along for heck. As he slowly got ahead of me, I called out, "Thanks for understanding!!" Fadli waved empathically and slipped left at the lights as I stopped for them to turn green for my right turn to Kijal. 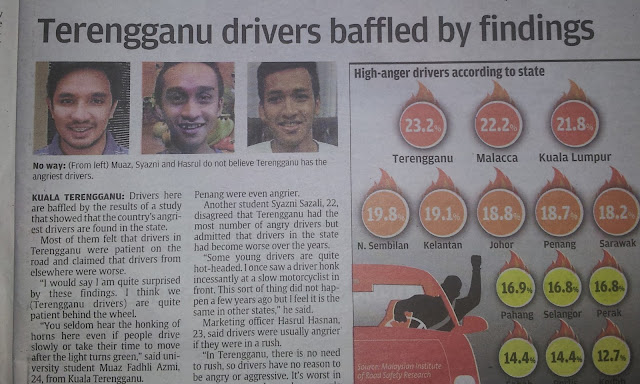 Which brings me to the headline in The Star today.
It is one ignoble thing to be listed at the top of the states being home to the angriest drivers in the state. It must be a jewel in  that ignoble crown then to be baffled at being found out.
Perhaps some morsel of truth is to be admitted in their bewilderment. Perhaps they are not angry per se.
But there is much to be desired in the roadsmanship of this state's drivers.
They hog the right lane in a dual carriageway, holding station at 60 kmh on a 90 kmh limit. They would not have any reservations about grinding into your bicycle as they  multi taskingly exit at a junction while balancing an infant on their laps, in the driver's seat mind you, with a cellphone pressed against their ears. Unrestrained toddlers trapeze between seats, and it is cultural to never wear a helmet whatsoever regardless of whether you're a motorcyclist or pillion. They have no reservations about leaving their engines running while refueling or racing against traffic on the emergency lane in order to avoid having to use the U-turn 30 yards away whilst reserving the right to evict legitimate users of the emergency lane such as we cyclists are. Beating a red light seems to be a way to score points towards the afterlife. In that sense, they certainly have it down pat in drawing the afterlife ever closer to the here and now.
Perhaps it is a nouveau riche affliction when civic maturity has not arrived as prematurely as wealth in a town that employs oil and gas executives and well paid offshore boys living amongst the peasantry of what I can't help but describe as the junction between two small towns which has been overlooked by even the most negligent demarcations of progress. Perhaps. But I really am not certain what causes such prevalent indiscipline and widespread lack of humility in the face of the many odds stacked against anyone's survival rate on the road. It's not the state, really. It is endemic to our nation.
These are not bad people. Indeed they are downright lovable. Which perfectly reflects their rebuttal to the statistics in the press.
However, I do not see the sense in young boys and girls being raised to think that it's alright to run circles around simple laws meant to preserve the life that will mourned over most  bitterly when it is lost to a senseless yet avoidable degree of severity in a mishap. Whither the claims to sanctity when littering after the pasar malam is committed without the batting of an eyelid, or when a mirror-polished car passes by, slowing to a halt at the traffic lights only for the heavily tinted window to roll down an inch to facilitate the hurling of an empty cigarette box onto the road?
When we fail to redress the very basics in adherence to right and wrong, we run the risk of raising a village idiot.
And failing as a society, a state, as a country, we are well on the way to breeding one too many an idiot village.
Posted by hobbit1964 at 10:31 PM