It was the feeling of being submerged, of looking at the world from behind the anechoic glass plate of an aquarium that was slowly driving me to fear and despair. In my ever fore fronted sarcasm, I would have thought being unable to hear would contribute to my peace of mind as a husband. Instead, the deepening sense of isolation from her and those who matter to me made me worry that I was no longer a part of their world.
It was a long week over the Aidil Fitri holidays. My stuffy nose did not want to relent to antihistamines, while all it normally took me to self medicate and cure was a few rounds of vitamin C. I must have contracted a belligerent strain of the influenza virus from that car salesman, and what possessed me to seek his guidance around a car the likes of the Veloster I cannot now adequately justify. My head soon filled with fluid, and flying became physically painful on the eardrums. I know about the rule concerning flying under the influenza, but for all the years I had in the Nuri, it was never a worry as I could Valsalva my way out of it. What was different this time was, the Valsalva was completely dysfunctional. Which perplexed me beyond the point of anxiety.
It was also just about this time that I had to report to the new company's headquarters for an induction session and documentary registration. The pre-employment process involved an aircrew medical check-up at Twin Towers, which meant that I would fall under the scrutiny of the rather meticulous Dr Dalbir. I was nervous about the audiometry, as that was his pet area of concern.

True enough, even I could tell that the audiogram would show worse results than those of my previous visits. The doctor tsk-tsked at me and told me that my hearing had become worse than ever. I was thinking yeah, of course, I've got glue ear, but I knew better than to start anything with an aviation doctor. I watched in curiosity as he scratched out a remark on the audiogram. He turned to me and then said, as sober as any judge, "See an ENT specialist. As soon as possible. There might be something in there that's causing problems."

It took me a few more days after settling in to look up the list of panel hospitals and make enquiries over which of those had an ENT specialist. I thought Sime Darby would be alright; decently located and surrounded by reputable restaurants. If I was diagnosed with anything scary, at least I would have a place for a last supper.

Sigh. I do so hate hospitals.

It was Monday, and I was already tense from enduring a traffic jam just 5km long but enough to have consumed 45 minutes. I was not late for my appointment, but I had not reckoned the jam would be so sticky. Like my Eustachian tubes, yeah.

Dr Ravi was what any teenage girl would want in a man. Professional, new-age-cutesy and with a good tableside manner. Bald and tall, he greeted me cordially and motioned for me to be seated. I tried to provide him as comprehensive a preamble as possible, but he gazed at me without so much as a nod. Before I could reach halfway into my bulleted narrative, he summoned me into what looked like a barber's chair facing a display which made the home theatre enthusiast in me perk up. Then he used the optic probe first in my right ear, then my left. It was evident that my middle ears were completely filled with fluid. He described the fluid level behind my eardrums, and I too could see what looked like a front-loader's water line amidst much cilia and a few specks of wax. Then in went the probe through my nostrils. I was surprised at how painless it was. The LCD display continued showing what looked like the tunnel chase scene in Initial D, except this was into my nose. Then the probe stopped moving. I could hear Dr Ravi thinking certain Greek words belonging to Archimedes' infamous nude outburst.

Then he spoke. I too, could see that there was something not quite congruent with the many cross-sections of the ear I had studied the preceding week. "There is a mass, something there, blocking your Eustachian tubes. That is why your Eustachian tubes are not draining when you swallow." With such words and an image coming together, I felt a chill creep into my chest. Oh, I thought. This is how I get told I have cancer. 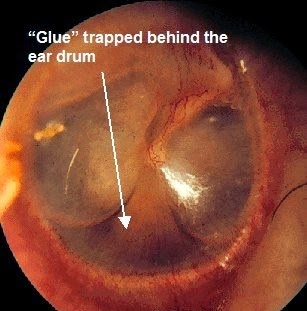 The probe was put away and as Dr Ravi walked to his chair, I did to mine. I sat stoically while he spoke. "As far as your fluid behind the eardrum is concerned, it cannot drain. We have to do surgery. As you could see, the tubes are blocked by that mass of tissue. I will cut into the eardrum, and draw out the fluid. Then I will put in a grommet, but for a year no swimming! Then as far as that mass is concerned, it's a biopsy. Do you have Chinese blood?"

I nodded wordlessly. "Well, if you have Chinese blood chances are that you have naso-pharyngeal cancer. If you are Indian, there is no chance of it." I sat there thinking, do I get saved by pledging allegiance to one side of my genealogy?

"When do you want to do it?" The doctor's voice reeled me back from my Lizzy McGuire moment.

"Soonest". The doctor busied himself with his calendar and a few brief phone calls. He grinned, like all this meant business as usual to him.