From The Frying Pan Onto The Griddle

﻿
Meet my friend, Capt Latt Armeda. He has flown in quite a few places, from Iraq to Bahrain after the United States, and is now amongst us in the company. We often talk at length when our rosters overlap, and it is good to see the United States through the eyes of someone who has served under the military in various parts of the world. As with anyone, from whichever country, who takes pains to step outside his comfort zone, psychologically as well as geographically, fences are dissolved when this happens, and our chats are always refreshing. He is a big fellow, and there are ample cartoon references when we are seen walking together.
We also have Abel Alvarez, from Spain, who has taught me a few tricks on the aircraft, and we have had a few chats over the history of Spain, her wars with Britain and how she minimised the scourges of WWII.﻿

The new company is a place full of different faces. There are foreign pilots from America, Spain, Italy, the Emirates, Colombia and the UK amongst others. The conversation is always varied, and there are many conspiracy theories being trashed about at any one time over coffee. Then there is SFO Ugo from Italy. Yes, I have heard ribbings and jokes over this too, but cultural ignorance fatally mistaken for humour runs the risk of falling flat on the comedian's face because from each of these persons I have learned of individual struggles to travel anywhere to earn a buck and fend for a family in the carving of better opportunities and futures for their children. In the end, when the coffee cup has been drained, we are all simply tired daddies trying the best we can for the ones we love.
﻿﻿The regimen of flying in the new place is tighter than in the old place. I find keeping up my cycling programme ever the harder, as snatching time in the morning is just impossible when the first wave mustering is 0630H. You may land and be lucky to be on split duties and skip home for a nap or no mind-load to deal with till the next reporting time at 1400H, or be plain blessed and find that there is no second wave for you at 1400H. Routinely though, your second wave waits for you at 1045H even as you prepare the trim sheet and manifest load at 0630H. Yes, a 1045H second wave means you are back at 1400H or sorts, and the rest of the day is either standby or go home. Still, wait as I may till 1745H, I cannot muster the courage to try cycling under the relentlessly scorching heat of the past three months to date. My prayers are sometimes answered when I get a few days of consecutive mustering times at 0930H. I get to sleep an extra 45 minutes compared to most mornings by waking up at 0615H, starting the ride at 0715H to return by 0830H for a rushed shower before shooting off to work by 0900H.
﻿
﻿ The past three months have been good months to fly with the prevailing North-Easterly winds giving me ample opportunity to sharpen my approaches using this aircraft. This week, the winds have died down, to pick up feebly from headings exceeding 100 degrees. The aircraft captains have taken over the approaches, and I get to kick back a little and catch up on other aspects of the aircraft, such as reading, which is subservient to Newton's first law of motion.
﻿ 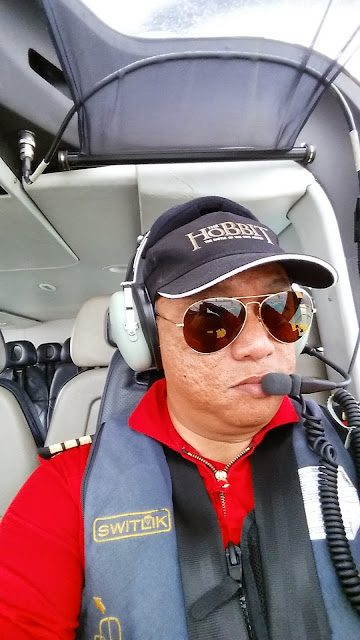 I have settled down a bit more, in the cockpit, and have begun carrying coffee in a flask to sip between radio calls and entries into the navigation log. The door slots accommodate less than the EC225's but I will have to make do. While the cockpit doesn't feel particularly small, it really is compared to the old French bird, and you will find it to be so when you have things to carry with you. The door pocket will not take a David Clark headset bag; in fact it cannot take any regular bag. Relegating a bag behind the collective control also means it is not rapidly accessible in flight, but I have learned to make do with a smaller bag crammed into the door pocket and have maximised the creature comforts of a smaller cockpit by not taking the kitchen sink along with me.

Have I walked out of the frying pan into the fire?

Not entirely. All employees, and I suppose this applies to any profession, must concede that there is no such thing as a perfect company. Every single one of them has their own brand of politics, and the further the distance an employee keeps from this fatiguing embroilment, the lower the frustration floor. That is the first pillar of truth that must be swallowed. The second, invariably, is that HR is the virally malignant department of any company hell bent of fixing what isn't broken. By both extrapolating as well as interpolating between these pillars, we can either tie our hammocks for a rest or yank the roof upon ourselves as did Samson after his crew cut grew out.

I am just going to have to bite down here till captaincy comes, because I just can't hop companies again at my age. It is not easy absorbing bitch-screaming at maximum amplitude with my already strained tympanic membranes.
Posted by hobbit1964 at 5:50 PM