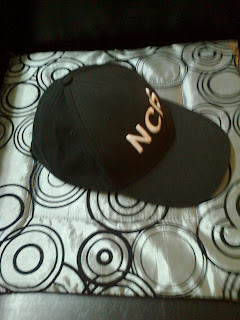 That's what they call me. Not at all as any sign of rank, but because ﻿nobody is bothered to call me by, even less remember, my name.
The staff manning the frontdesk counters at the Department Of Civil Aviation call me that. The cops and officers at the crash site in Sibu called me that. Cabbies call me that when I am buying a ride to the airfield. I find it as rude as tv talk show hosts who call their guests Doc and Prof.
I had the pleasure of such pristine company on my maiden task from KK to Sandakan to Keningau and back to KK. The clients were staff of a government agency and they were to be on board, snapping photographs of various 'hotspots' exhibiting environmental regulatory violations. The plan was to fly KK to Sandakan for a nightstop, thence overfly the hotspots enroute to a nightstop in Keningau. The third day was for us to fly from Keningau to KK to refuel, as the agency had such an agreement with the company as to not pay for refueling in the field, but only for refueling at aerodromes. Right...
I had a sleepless rolling in bed the night before this maiden flight of mine, all solo with no senior pilot to so much as fake a cough should I be slipping in flight. Two incidents in succession clouded my  mind, and when no cause code is disseminated the speculation looms like a bloodthirtsy demon lurking in the shadows. What few hours I had in slumber stirred  my agression to wrestle with the spindly Bell in the cheery light of morning. I rose early and headed for the company hangar to check the manifest, the loadsheets and flight plans. I scanned throught the manifest and saw that I would be carrying Thad, whom I had acquainted myself with during my line check, and Dweeb, a hulking 5-foot 9 porcine drip with a camera.
It was indeed starting on a wing and a prayer as I pulled the Bell into a buoyant climb astride the Kepayan ridge for the first leg of the task. We were to look for the hotspots along Inanam, Telipok and Tuaran before heading for a hotspot in the vicinity of Gana. Dweeb sat in up front armed with the camera and asked me, "Point-point dia di mana Cap?" His question truly reflected not merely his intelligence but also his prep for what was essentially his own job. I pointed to the map display on the GPS clamped onto the glare shield shrouding the instrument panel. "This is us. That's the track we must fly. And that's the point at which you start taking your pictures."

I was tense. I knew that after Telipok's hot spot, I would have to turn for a hotspot near Gana, and that would mean crossing the range. As it stood, the track would cross just behind Akinabalu, the 13 455 foot behemoth. The vision of the Bell going inexplicably into a spin did keep flashing across my mind.  I dead reckoned at crossing the range through Kundasang, and raised the nose to 70mph to gain height as I transmitted my intention to Kinabalu High Frequency 6825. The steep rugged mountains rose like voracious canines and incisors as the little Bell waddled at a virtual inchworm pace across the range. I looked left to glance at Mount Kinabalu. It was dressed like the Grim Reaper, black clouds from her head billowing down to her feet, casting the Kundasang valley into shadow. I could feel my clenched fist on the cyclic beginning to emboss the cyclic's grip pattern into my lambskin glove. I knew I was getting way too tense to ride the wave should turbulence set in. I forced my hand to unclench. The leeward buffeting rocked the Bell gently, but she pulled faithfully across the jagged peaks and I was soon looking down into the plains of the Ranau Valley. I began to breathe again, and circulation to my right palm resumed.

I made Sandakan at 1130H. The company's Sandakan branch operations guy, Ram, took the entire bunch to a popular grilled fish spot, where we stuffed our faces more with fish than orisa sativa. I chased it down with the stall's proprietary fish and lemongrass soup, extra large bowl. Then to a hotel to re-fold my map, iron the next day's uniforms and nap. 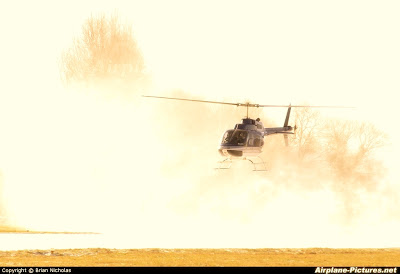 The second day, the gods must have been smiling upon me as weather was beautiful. Prior to take off, Thad informed me of a change of plans. There would be no night stop at Keningau. Instead we would track direct for KK. That made sense to me, and I had wondered why they originally wanted a night stop in Keningau when refuelling was not an option, with KK a mere 35 minutes away from Keningau. I just did my "Very good sir." and flew accordingly. I accomodated a landing at what they called a suspicious looking sawmill, encountering brownout as the sawdust and dry soil suspended in the downwash. I had previous brownout experience while carrying out a special forces task during a localised drought so that didn't  faze me. By the time the timber camp kids came running out for a view of  the Bell, I lifted off to track for the other hotspots.

The third day, weather was again, simply beautiful. I assessed it as I stood on my balcony, knowing that days would come when weather woud not be as fair and my judgement would be further tested than these  three days of grace.

I parked in the company's lot, thinking of a nice breakfast at the canteen and walked to the ops room. Thad was smoking at the door, and cooly turned to me and said, "Cap, I will take on one more passenger."  Last minute additions spoil the flight and fuel planning, and an extra passenger was not in the air transport request. I gestured with my palm at him to hold on, uncertainty over the feasibility of his impromptu requirement making it imperative for me to fine-tooth comb the performance charts. I checked my load sheet at ops and found that the manifest was for two passengers only. An extra passenger would tip the Bell beyond its safe power margin. We were overweight and would run out of power should we need it for a landing or to counteract turbulence or weather. A few of the ops boys began recalculating the flight time and fuel requirements, but we still ended up overweight. I returned to Thad and explained the situation to him, using the performance charts to clarify the precarious situation we were in. It slowly dawned on me that Thad was no clearer on the problem than he was on the sexual cycle of the heartworm, as with every point I explained to him, he asked "So???" I was flushed with annoyance, but kept my poker face on.

I explained his options step by step. He could summarise the itinerary so that the fuel required would be lessened, freeing up more weight as payload to offer. He shook his head adamantly. He would not cut short the hotspots.  The other option would be to leave behind one passenger. He retorted in unmasked arrogance, "Yes, I will decide." And while he was deciding, he primated himself on the telephone line for many minutes. I went out to the dispersal to preflight check the Bell. When I returned to the ops room, I was informed that the flight had been cancelled. I shrugged and went back to the flight planning cabin to surf on line. A few minutes later the ops staff came up to me and said that the flight was back on again. Was it now? What was with the cancellation then? It seemed that Dweeb, weighing almost 200 pounds, had been turned down by Thad in favour of the new passenger. And so in 5 minutes we were airborne and tracking for Tambunan to fly down to Tenom. The new passenger sat in the rear, looking distraught. Thad took to the front with the camera. The first point was to land in some field in Tenom for what purpose I was not bothered to know. I was merely the cabbie here.

I crossed the range at 4500 feet, then dove down to 2000 feet to cruise past Keningau on route to Tenom. We overflew Tenom town and Thad identified the footbal field I was to land in. After landing, the newbie got off the rear seat and rushed out to meeet an elderly chap, handing over a mysterious looking small brown envelope. The way he handled it made it look like he was handing over money. "This is an emergency thing," Thad explained over the intercom. I nodded like being so informed made all the difference in the world to me

I completed the sortie, overflying all the remaining hotspots from Weston to Menumbok and Kuala Penyu and returned to KK just before noon. I completed my paperwork. Just before I could scoot off for lunch, Capt H, the KL branch manager and company safety officer, drove in from the airport and chided me over a complaint being raised on the very first task I was assigned. "Hey, I may be far away in KL but I know everything that goes on here. What happened, you offloaded a passenger is it?"

When I realised that I was under cross examination, I suddenly began to miss my air force flying days because the words of General Maximus of Gladiator echoed true: "A soldier has the advantage of being able to look his enemy in the eye, Senator."

As I explained the events of the day, Capt H's terse tone mellowed. He seemed to see that he was rused into thinking that I had offloaded a passenger in the field. In mitigation, he pep talked me into checking with the passengers at the end of each flight, if they had any complaints to register. Amongst other things, yes. Plus some homework he wanted out of me to complete the preliminary report on the Sibu mishap.


So Thad's subordinate staff tells him about a compassionate case he has with his kin in Tenom. So he tells his lad that he can have him flown in to Tenom so that cash to tide them over can be handed over directly, and in style. So Thad does not clear the additional passenger with ops, but tries to deal directly with me. When ops and I calculate the all up weight, we find it bordering on the limited power graphs and advise him accordingly. Then on the pretext of decision making over the phone, Thad gets miffed with me and complains to Capt H instead of registering a legitimate complaint on paper.

I would love to know why he cancelled the flight and then put it on again.

I have little regard for juveniles who know absolute nuts about aviation, who haven't the common courtesy to adress me by name, calling me Cap instead, and  after I provide them with professional caution, go bitching behind my back like some jilted lover to her girlfriends. These are the kind of people who forget that no matter what they pay the company, if I go down, they go down with me.