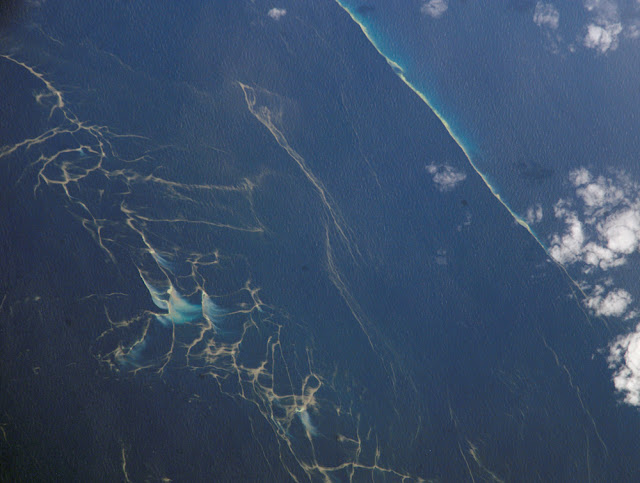 It's beginning to look like the monsoon is passing on its way. My training captain told me that a good sign that the monsoon has abated is that the plankton comes out to play. I was for a pause, flabbergasted.
"Plankton?"
"Yes," said he in all earnest, raising his eyebrows at me emphatically. "Look down and you can see for yourself."
And there it was, in flamboyant wisps, like sawdust chromatographed on the mood drifts of the waves. Plankton. I had no idea that I could see plankton with the naked eye.
I beg your pardon that the above picture had to be sourced from Google images courtesy of NASA Earth Observatory which allowed the large scale pic download, as I doubt my spartan 3.2 megapixel Nokia would do anything more than render the difference between blue and white, light and shade.
Yet, thanks to the internet affirmation, I can safely say in a eureka moment, "Yes!! That's what plankton looks like!!"
It's a good change to be out in the sun at 3000 feet. When turning to intercept the outbound radials after getting airborne, levelling off brings you face to face with cloud mirrored on a placidity-polished sea all the way out to a hundred and seventy miles away. The portside window allows a view of the coast and the estuary at Kuala Paka. The teh tarik hue demarcates sharply in a paper fan planform from the deep satiny blue of the sea, telling much about the goings on upstream. The departure brief that I provide at embarkation point at the terminal now includes "...weather during this flight will be fine with scattered cloud..."
One of the pilots asked me how I feel having started flying here in the thick of the monsoon and coming out the other end into fair weather and sunny skies. I muse to myself, "Grateful!!" I think this way is a better introduction to offshore flying than to have a rosy start and then be peturbed by being embedded in cloud from 900 feet off the runway till eight miles from the destination rig.
And all this, while being a non-instrument rated pilot no less. The change in weather also brings some cheer that my instrument flying training phase may commence, with the Instrument Rating Test looming 'round the nearer corner. Then alone can I say I am a full-fledged offshore pilot as opposed to the sunshine pilot I am now. It's about time I got over that hurdle and on with this business good and proper.
Posted by hobbit1964 at 9:32 PM